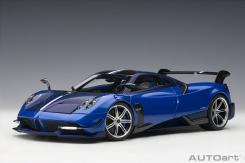 Pagani Huayra BC in Blue/Carbon in 1:18 Scale by AUTOart by AUTOart 78277
eBay Deal